Salinas, the village where some girls turn into boys at age 12

August 15, 2018 /LGBT News/ Chances are you’ve never heard of anyone’s sex organs spontaneously changing from female to male, but this fascinating condition affects about one in every 50 children born in the small isolated village of Salinas in the Dominican Republic. This phenomenon poses many challenging questions about what defines gender and how societies shape their concepts of it.

In the 1970s, Julianne Imperato, PhD, of Cornell University traveled to the Dominican Republic to investigate claims of young female-appearing children developing masculine features. The locals referred to the phenomena by two names: guevedoces, translated to mean “penis at age twelve,” and machihembras, meaning “first a woman, then a man.” In the following years, reports suggested that this was also common in the Sambian villages of Papua New Guinea, where the locals called these individuals turnims, meaning “expected to become men.”

The chromosomes that determine our sex normally do so at conception even though sex organs don’t begin to form until eight weeks into fetal development. When a fetus has a Y chromosome, it causes a surge in testosterone production that leads to the development of male sex organs. Meanwhile, if a Y chromosome is absent, the fetus will instead develop female sex organs. However, for guevedoces, who are also known as pseudohermaphrodites, an enzyme deficiency during fetal development, specifically the enzyme 5-alpha reductase, causes the male sex organs to never properly form. It’s not until puberty, when these children experience a second surge of testosterone, that the testes descend from inside the body and a penis grows.

Deficiencies in 5-alpha-reductase seem to be hereditary, which explains why pockets of pseudohermaphrodites often appear in small communities like Salinas. 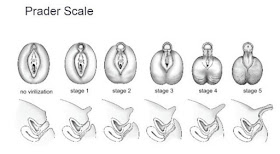 During the 1970s, guevedoces births were reported to account for as many as two percent of all births in these small villages of the Dominican Republic. Since then, doctors in villages in both the Dominican Republic and Papua New Guinea have become experts in distinguishing normal female external genitalia from the ambiguous genitalia of guevedoces babies. Due to the prevalence of these births, both cultures believe in three sexual categories: the male, the female, and the pseudohermaphrodite.

The guevedoces’ rare start in life has also provided insight into human sexuality. Despite being brought up as girls for the majority of their lives, most young guevedoces identify strongly as heterosexuals, proving that hormones in the womb matter more than rearing when it comes to your sexual orientation.

The differences in the way these two societies deal with this rare occurrence hint at the magnitude to which a society’s culture can affect an individual’s beliefs and opinions. The Sambians view these children as flawed males; the children are rejected and humiliated by their families and society. On the other hand, in the Dominican Republic, the birth of a psueodhermaphrodite is fully accepted and during puberty, the child’s physical transformation into a male is marked by joyous celebration. Gemma Nierman, PhD, of St. Mary’s College and summer lecturer at University of California, Berkeley, remarks, “the Dominican Republic communities that quietly accept their citizens with 5 α-reductase deficiency are a model to the world on how to deal with genetic differences...[they] are showing us how to help these folks have a full and rewarding life despite their genetic disorder.”